Forest Bluff School is one of the few Association Montessori Internationale (AMI) accredited Montessori schools in the Chicago area. Forest Bluff is also a member of the Association of Illinois Montessori Schools (AIMS), and all of our teachers belong to both AMI and the North American Teachers Association (NAMTA). For more information, please visit the websites: 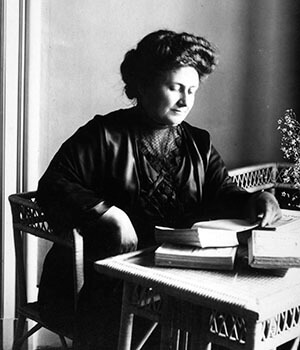 Throughout the 1920s, Dr. Maria Montessori was increasingly finding that enthusiasts about her lectures and writings were misinterpreting what she was saying about freedom for the child and a number of other topics. She and her colleagues realized that they needed to officially make clear that she was not espousing permissiveness for children, nor was she suggesting a rigid approach with too high expectations of behavior and learning. An international organization would clarify Montessori’s ideas as she continued to evolve them through a lifetime of work with children all over the world.

In 1929, Dr. Montessori and her colleagues established just such an organization, the Association Montessori Internationale (AMI). It was headquartered in Amsterdam, and Montessori’s son, Mario M. Montessori, became its first Executive Director. Mario was by this time a close collaborator and advocate of his mother’s work. He travelled with her throughout her life, and, in her later years, was instrumental in developing with her the advanced educational materials for elementary aged children during World War II in India, and afterwards in Europe.

Today, AMI continues to protect the integrity of Montessori’s work through its internationally recognized training courses for Montessori teachers and Trainer of Trainers programs. These centers are established throughout the world and conduct national and international conferences on six continents. In addition, a Pedagogical Committee consisting of AMI Trainers reviews annually the official Montessori Materials and Prepared Environments advocated for AMI classrooms. They make modifications to the latter as the need becomes apparent.

Since our founding in 1982, Forest Bluff School has been accredited by AMI/USA, the official affiliate of AMI in the United States. This means that we have met all qualifications of AMI/USA for nearly 35 years. These include: an evaluation by an AMI Consultant every three years, a full staff of teachers who are all graduates of an AMI accredited teacher training course, frequent attendance by these teachers at AMI Refresher Courses and Conferences, and properly prepared classrooms with a complete set of Montessori Materials in excellent condition for each age level.

The North American Montessori Teachers Association (NAMTA) is another organization important to the evolvement of Forest Bluff School as a Montessori school of the highest quality. Founded in 1970, NAMTA is an affiliate of AMI. Its goal is to link the legacy and future of Montessori education through print publications such as The NAMTA Journal, and audio-visuals and DVDs that help parents extend Montessori into their homes for their own children. NAMTA also gives conferences on educational topics of current national interest and establishes tools for research from their extensive archives, such as the NAMTA Online Bibliography of over 16,000 citations.

From NAMTA’s beginning, it has furthered the advancement of Montessori concepts into the mainstream of educational thought to a remarkable degree. For example, its internationally renowned Executive Director, David Kahn, has been instrumental over the years in introducing key figures in the educational and psychological fields worldwide to a deeper awareness of Montessori education and the breadth of its global impact.

Early on, Kahn established ongoing conversations with several influential social pioneers who were sufficiently impressed through Kahn’s efforts that they agreed to read, and subsequently write reviews for, four of Paula Polk Lillard’s books on Montessori education.

Forest Bluff School is also a member of the Association of Illinois Montessori Schools (AIMS). This organization facilitates interaction and connection between Montessori schools, as well as other public and private schools within the state. Specific goals are to support best Montessori practices, excellence in business, finance and ethics, and the monitoring of pertinent state legislation.

On the national level, AIMS works through the Montessori Public Policy Initiative (MPPI). This group recently held a Retreat on Public Policy co-sponsored by AMI, AMI/USA, and the Trust for Learning in Washington, D.C. The goal for such national events is to gain more information and connections across the country to help solve some of the challenges faced in Illinois.

Finally, AIMS is a valuable resource for the establishment of Montessori classes in public schools in Illinois and private schools such as Beacon Academy, a Montessori high school recently founded in Evanston, IL. Because we believe deeply in the possibilities of traditional Montessori education for all ages, its availability to as many children as possible is a goal of greatest importance to us.

Forest Bluff children are unique in their inner peace. They are content, confident, and kind. They are comfortable with themselves and it shows in every group they are in and everything they do. This inner peace, coupled with their desire to learn, will lay the foundation for a happy, successful life.