Changing our View of Education: A Positive Approach

The positive nature of the Montessori approach, with its emphasis on process and discovery, is central to why it works so well for children in their development. When Dr. Montessori lectured in London in 1946, she pointed out that conventional education focuses on mistakes. Think of your own experiences and how your schooling was structured; you will probably remember that there was constant attention given to your errors. Avoiding errors was the thrust of the system. Even with a few enlightened, kind teachers here and there who emphasized process and exploring bravely, the main message for how you were to learn things was by having your mistakes pointed out to you daily in the form of testing, performing in front of classmates, and reaching for the one “correct” answer to each question. This emphasis, by design, encourages children to lose confidence in their originality. And, yet, we know that developing unique perspectives is invaluable. Thus, the very thing that makes society prosper is being discouraged on a daily basis in our conventional school model. 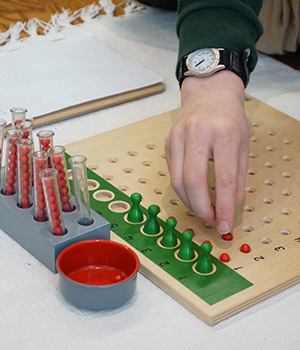 ou may be wondering how there could be another way to teach, when there are certain areas in life where there really is just one correct answer. Mathematics and science are not a matter of opinion, for instance. There are facts that children must learn in order to succeed in some areas. Which is more important: the process, which leaves room for originality, or the answer, which must be consistent with the truth? The answer is both, and Montessori’s approach allows for this interesting dynamic to play out in the classroom, as it does in real science laboratories and in sophisticated math discussions. Dr. Montessori discovered that there is an alternative way that children learn about exact answers.

Montessori’s view was that there is exactness in mathematics and science, which gives our universe balance and beautiful symmetry. Realizing this is truly awe-inspiring for children! But instead of having this phenomenon of exactitude dominate the whole educational approach by trying to stuff answers into children’s minds, Montessori sought to awaken their wonder for exploration and to help children discover pathways of thinking that lead to correct answers. A prime example of this is the way elementary-aged children explore math through the specially-designed materials that require several steps and attention to detail. The children ultimately arrive at the correct answer and are often quite satisfied with themselves after much effort; all the while, they are developing cognitive processes and character traits that contribute to future learning and problem-solving.

Through the materials and how they are presented by the trained teacher, Montessori children in an Elementary classroom search for the paths to find the true answers; when they get there, the results they come up with are their own discovery, just as if they were the first mathematicians to discover them. The result of this repeated experience makes children view mathematics as the wonderful puzzle that it is. The idea of being embarrassed at arriving at an incorrect answer is foreign to these children, for whom the taste of finding the right answer is so sweet that they want to explore other avenues and learn more. Mistakes are integral steps in every journey, and this reality becomes familiar and acceptable through repeated experience.

The Montessori materials guide children to find the ways that work, making the adult corrector obsolete in many cases. For instance, when two children do long division problems together with a material called Racks and Tubes, there are many places they might err. They could start off incorrectly by placing the tens board to the right of the units and work through the whole problem incorrectly, only to find at the end that their answer is incorrect (either by bringing it to an older friend who can do the problem longhand on paper, to the teacher who can check it, by using another math material to do the inverse problem and see if it matches, or by checking it themselves against a calculator). They go back to their work—puzzled—and like two detectives, they re-examine how they set up the problem (which is often when they will identify this first mistake), or they employ a friend to see if they can identify where they may have lost the path. In my experience as a Montessori elementary teacher, this is when the fun really begins if the adult supports an attitude of curiosity about finding the error. 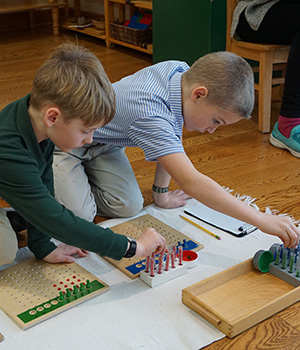 Children will repeat a problem over and over, sometimes eliminating just one of several mistakes at a time in the same math equation or process. The important thing is for the teacher and community to support the quest to get to the end, so that the children do not fall into a habit of giving up too easily or repeat making the same mistake so many times that it gets ingrained! By keeping tabs on their progress, the teacher can see when to step in and point children in the right direction, perhaps making an observation and/or asking a question: “Oh! Wait, I see­—look where your units board is. Do you remember where it belongs?” This is usually all that is needed to get an “Ah-ha!” and a delighted, re-energized effort to try the whole thing again. Children are remarkably resilient, especially when working with a friend and being allowed to own the whole process of the math equation. When they finally, leaning over the calculator with suspense, find that they have achieved the correct answer by their own efforts, it is an excited triumph that feeds the urge to tackle more and more problems.

Very rarely have I seen children want to get to the answer easily so they can quit. There are some who will be tempted to use a calculator to find the answer and just write it in, sometimes several times, to create the illusion that they have accomplished a lot of “work.” You may be surprised to hear that in a Montessori environment, that is actually the exception and not the norm. Teachers usually catch that pretty quickly, but even if they didn’t, and even if other children did not point to it and demand that the child work honestly and just as hard as they do, the child who does this often abandons the practice after watching others glean the internal rewards of sustained efforts and true glory of finally getting that answer. As children experience this quest again and again, they hone their skills each time. Eventually, the exercise becomes too easy for them, and they are ready to advance to another math process that brings them to their next level of challenge.

To describe all the ways children might err in the process of long division with Racks and Tubes would take too long here, but I’ll give you a sense: One child may write the problem down differently than their companion and, therefore, lay out some incorrect amounts when distributing the beads to be used—a mere flipping of two numbers, perhaps. This carelessness will eventually be discovered, and both children will realize the importance of double-checking with each other before they begin. They also might place the working number of beads in the wrong category or confuse the order of the categories (units, tens, hundreds, etc.). Again, these are mistakes that reflect the need to double-check their layout before they begin the process. 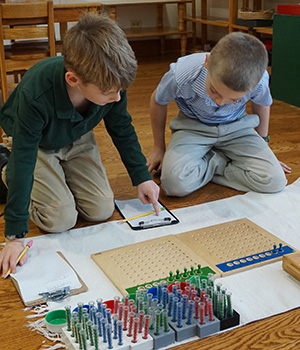 Another place they may err is in physically dropping a bead or beads, losing them as they spring across the floor and losing count of how many were in the bowl to be distributed. This reminds them to slow down, be careful, and focus on their physical movements. They could also lose count or forget a step if they are interrupted by conversation or stop what they are doing to attend to something else in the middle of their process. This would illustrate the importance of sustaining their focus on the task at hand until finished. Finally, they might write the numbers down in the wrong order at the end, showing again a need for more careful, focused attention and awareness.

Sometimes, two children actually have two different answers written down, and they’ll be perplexed about which one is correct, garnering more discussion and a backtracking of their steps. Watching all this is incredible; the amount of teamwork, social interaction, struggle, humor, fun, and agony that can accompany such a process as doing a long division problem is positively brilliant in the sense of integrating all aspects of a child’s development as a person and a mathematician. For a Montessori teacher, bearing witness to such self-discoveries is joyful. It is a special experience to spend one’s days in an Elementary Montessori classroom with children working with the Racks and Tubes! It can take more than an hour for children to complete a challenging problem if you account for the self-correcting they may need to do, but the learning that occurs is immeasurable. And the more children work with such processes, the faster they achieve success each time, fueling their desire to tackle more challenges all over the classroom.

This is just one example of how Montessori fuels the development of children’s resilience and perseverance in a very direct and effective way. And because a Montessori classroom is a vibrant community where everyone is working simultaneously on different things and seeing what others are doing, the practice of pushing oneself until achieving success is contagious. Children will stop and help each other, discuss and share a conundrum, and sometimes get intrigued with each other’s experiences of learning. The learning is therefore—in economic terms—a positive externality, meaning that the network of students spreads newfound information via witnessing and sharing experiences; this happens naturally in a Montessori elementary classroom because of children’s gregarious social behavior at these ages. This is another example of where Dr. Montessori designed an approach that employs—rather than fights against—the developmental characteristics of children in this stage of life between ages six and twelve, specifically, their tendency to be very social and to always want to find out what their peers are doing. 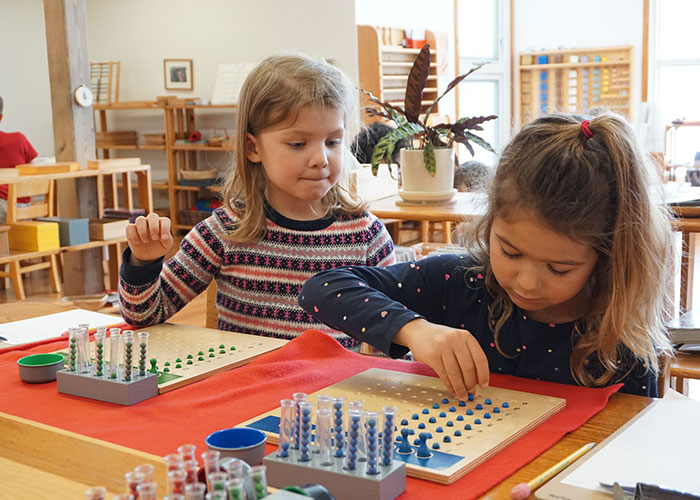 In the above example, students may use the mantras they learned in their Primary years (ages five and six), such as “The units always go on the RIGHT” and “We always begin with the UNITS” (“except in division, when we begin with the highest category present”). Students love these little cues, and when the Primary teacher says them each time she is with children in a math presentation, the children often chant along. There are just a few such mantras that carry over from Primary to Elementary, so children tend to remember these. We have found that children benefit from having such important points of interest brought to their attention regularly, so that they can commit them to memory.

When working on math and science, the children in a Montessori classroom don’t just value the exactness of a true answer; they love that there are answers to find, and they see each exact answer as a part that connects to a greater whole, creating a universal balance in which each component matters. With the Montessori approach—where the processes of discovery appeal to our children’s developmental characteristics at each age—finding correct answers is fun, sometimes eventful, and always intrinsically rewarding.