It Begins with Observation 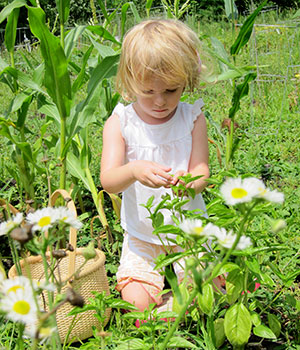 To help our children develop scientific minds, we first focus on their powers of observation. Babies observe their surroundings from birth. However, the ability to observe well must be cultivated throughout childhood. Being able to still oneself, to notice the sounds, smells, sights and details surrounding you is key to becoming a good scientist. Children need self-discipline and self-restraint, as well as the patience for deep thought, wondering and observing. Young children need to watch the natural world in order to understand the basic laws of science and how things work. They need the time to quietly watch and understand the real world, to create small experiments, to wonder, to ask questions.

Under the Age of Six

In the first three years of life, our children absorb a large collection of sensations and experiences that form their psyche, or who they become. They gather impressions of heat, darkness, rough surfaces, smooth surfaces, tastes, smells, breezes, largeness and smallness, and so on. This unconscious absorbing process happens through their interactions with the world, and the more young children directly relate with the real world and acquire as many impressions as possible, the more full their “library” of resources for understanding the real sciences of physics, chemistry, botany, etc. 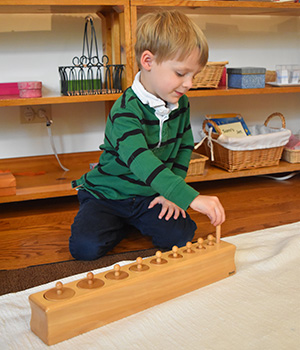 From ages three to six, children take the chaos of all these impressions and begin to organize it in their minds. Through the Sensorial Materials in the Montessori Primary classroom, children begin to recognize differences of three-dimensional sizes with the Pink Tower, of width with the Brown Stair, and of length with the Red Rods. This begins a foundation for scientific discernment and investigation. Young children naturally explore and are drawn to compartmentalizing and distinguishing very subtle and minute differences. This is the purpose of working with the cavities and the cylinders of Montessori’s Cylinder Blocks, for instance. By working with the specially-designed Sensorial Materials, Montessori children investigate and begin to make sense of the world.

Next, the Montessori teacher gives the language to name these differentiations, and children begin to own the information in a more conscious manner around ages four, five and six. The Pink Tower cubes are small, smaller, smallest; the Red Rods are long, longer, longest and short, shorter, shortest. The children can differentiate that “this rod is longer than that one but shorter than this other one.” By the time children reach age six, the Montessori environment has helped them to explore and catalog much about the world for themselves, and our children now have the knowledge to express what they see and experience. 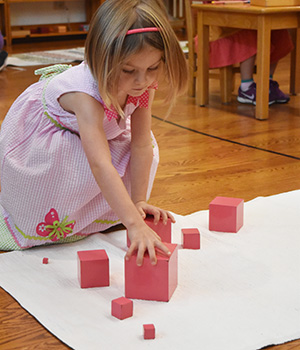 Thus, at very young ages, our children have gathered information about biology—animals, insects, plants, leaf shapes, and the smells, sights, behaviors, and sensations of many things in the natural world. They have collected impressions of geography and of measurement, of liquids in vessels and of temperature. They recognize qualities in their surroundings:

“That stick is longer than this one!”

“This leaf is a certain distinguishable shape and it has a scientific name. It is a different shape from this one over here, called a hastate leaf.”

“Florida is a land form in the water. I can see that it is a peninsula!”

The world lights up for them because of their new knowledge. Montessori children acquire a strong foundation of science, while simultaneously developing control of their hands and body movements and the ability to focus their attention on learning—all before reaching the first grade!

Montessori alerted us to a great change that happens around age six: “Education between the ages of six and twelve is not a direct continuation of that which has gone before, though to be built upon that basis. Psychologically there is a decided change in personality, and we recognize that nature has made this a period for the acquisition of culture, just as the former was for the absorption of the environment. We are confronted with a considerable development of consciousness that has already taken place…thrown outwards with a special direction, intelligence being extroverted, and there is an unusual demand on the part of the child to know the reasons of things.” 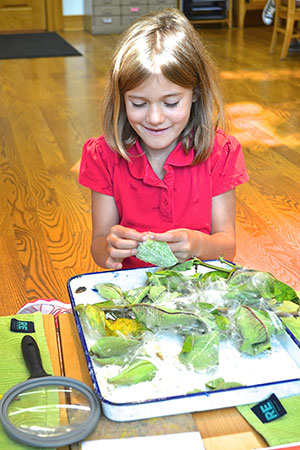 To meet this reasoning mind that wants to explore the intellectual world more than the physical world, our plan of education changes to match the new characteristics and needs of the six- to twelve-year-old. Instead of giving children experiences for distinguishing and discerning information that we can see, touch, smell, hear and taste, we now tell the children stories that ignite their imaginations and plant seeds of interest in a wide variety of topics, all interrelated—as they shall find—which they are then inspired from within to pursue and learn about. The Montessori Elementary teachers tell a story first about the creation of the universe, and the children burst with curiosity. They ask: “Why? How? When? How is this possible!? Is that what really happened?” Their own exploration of facts and scientific information begins as a fiery quest to educate themselves—a quest that goes on and on, as new information begets new questions and vice versa.

The first story is called God with No Hands to accentuate the mystery of how this first explosion that created our universe—as far as humans have been able to relate—happened without hands causing it or carving its parts. The children then look to atoms, protons and neutrons. They learn how molecules behave when heated and when cooled. They learn about how some molecules attract one another and others repel, and about all the drama of science in early space. This first story gives a foundation, a source, on which the children can focus their wandering, wondering minds as they begin to uncover for themselves the history of the universe and everything in it. From there, the children build an inner scaffolding, placing each new bit of information they discover into the structures they themselves design in their minds, each one making sense to that particular child with his or her own way of thinking. In this way, Montessori children create their own science educations, with help from the teacher who offers presentations that give clues and bits of information that each child can take and arrange neatly into his or her own mind as they go along. 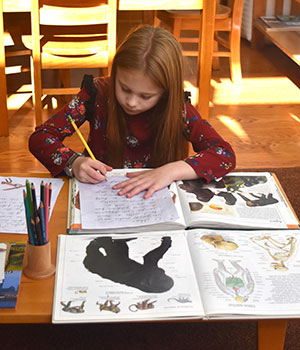 In the presentation of that first story, the teacher sets up and conducts several experiments which make lasting impressions that inform the children on basic scientific facts. All matter settled into one of three states, for instance: solids, liquids, and gases. The children see the ice cube, the water in a glass, and the empty glass of air and understand that everything is in one of these states. Later they may discover that there’s more to this, but this is the start of understanding all matter in the universe and how it is categorized.

A simple new piece of information, discovered in this way, now becomes enlightening—children begin to see the world around them anew:

“This table is a solid!”

“That orange juice is a liquid!”

“The space inside my glass before I poured the orange juice in was gas!”

And they begin to flood with more questions:

“Where did the gas go when I poured in the liquid?”

Their inquisitive minds surge forward on a never-ending journey of discovery, one that is happening all the time, whether they are in school or elsewhere. This is how the scientific way of thinking is cultivated in the early years and sets our children up for deeper study in the Upper Elementary and Secondary years and throughout their lives.