Our world has gotten both larger and smaller in the last century. While we have expanded in many ways—exploration, travel, population, and our effect on the earth—we also have become more closely connected to human beings across the planet. It is increasingly clear that what we do affects people not only in our community, but also on the other side of the world. Given this undeniable connection, it is more important than ever that we practice gratitude and respect, in actions as well as thoughts. This begins with our children’s education.

Dr. Maria Montessori’s “Cosmic Education” forms both the foundation and the inspiration for the Elementary curriculum. Through this approach to education, children learn the different subject areas in the classroom within the context of an interrelated universe. Every lesson is presented as a part of a whole. This gives children an understanding of their moment in history, as well as their place in the world, and all the ways they are connected to and dependent on other people and other life forms. In this way, they develop gratitude for the people and events from history that made their lives possible, and they cultivate respect for people and life in the world today. They also then naturally come to see themselves as significant actors in the world, with their own important role to play.

Gratitude for Our History

Through Cosmic Education, we look to develop in the children a sense of gratitude and respect for unknown human beings throughout history who have contributed to our lives today. Dr. Montessori wrote:

Let us in education ever call the attention of children to the hosts of men and women who are hidden from the light of fame, so kindling a love of humanity; what is first wanted is no patronizing charity for humanity, but a reverent consciousness of its dignity and worth. (1)

We do this in our telling of the Great Lessons. We give the children knowledge of common man. We let the children know we must thank the human being who invented the first chair: “Where would we be today without the progress made by the inventions of these unknown human beings?”

At the end of the third Great Lesson, The Coming of Human Beings, we talk about how special each and every human being is, and then say, “That's why we have to be so careful how we treat each other, because each of us in our own way is special.” The children learn in that lesson that human beings are unique because they have the abilities to think and to love. This encourages their understanding of the dignity of every human being in the world and inspires them to consider them thoughtfully and tenderly, even when their lived experiences are so different from their own. 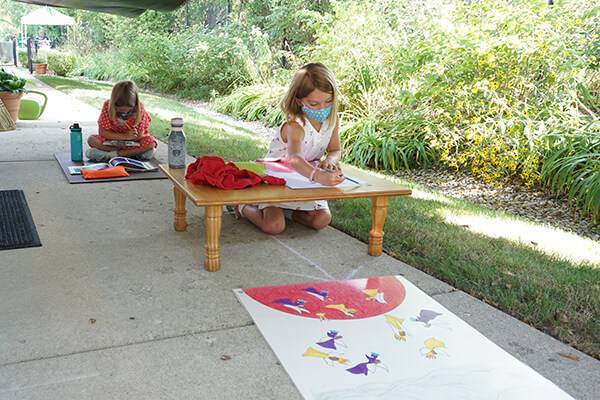 A Montessori Elementary student does follow-up work with an illustrated chart from a recent Great Lesson.

Showing the children how early human beings progressed, learning that with fire they could cook their meat instead of eating it raw, gives them an appreciation of the significance of their work and progress. They had to build from nothing! They must have been very clever! What gratitude we feel toward them!

In another of the Great Lessons, The Story of Communication in Signs, we express gratitude to the Phoenicians: “Thank you, Phoenicians” for the creation of sound letters—quite an exciting discovery. We say to the children: “What you have to remember and be grateful for is the story of the Phoenicians, because they made real letters for sounds.” This is also an opportunity to explore other ancient groups of people and the ways that their alphabets led to modern written languages across the world, as well as the groups that preceded the Phoenicians.

With a story such as the one that accompanies The Hand Chart, in which the children discover what a short time human beings have been writing things down compared to the time they have been on the earth, the children see what a great contribution the ability to record information and ideas has made to our existence. As we do not know who created the very first written character, again we have gratitude for unknown man.

In The Story of Numbers, the last of the Great Lessons, this idea again resurfaces. We tell the children, “Once again we have someone, somewhere—we don't know the person's name—to be grateful to for giving us a way of recording numbers.”

It is interesting to note that this grand and noble idea of respect for others comes up in each of the Great Lessons. No wonder they are called “Great Lessons!” They hold the truths under which every other lesson falls.

Respect for People and Life Today

Along with learning about history, we also teach children about the humans living all over the world today—how they live and how we need each other—as well as the ways we depend on nature.

In a lesson known as People in Different Zones, we discuss the differences among peoples who live in various parts of the world. These differences arise from the fact that we all satisfy the same human needs in a variety of ways. Through this, we can express the importance of understanding and tolerance for people who are different from ourselves. This understanding should lead to a greater respect for other human beings, and the realization that we are all deeply connected as humans underneath the many different ways we may be different.

Our lessons on the interdependencies of all life also foster respect and gratitude for other human beings. We say, “Look at the number of people who were involved in the making of the bread that William had for breakfast this morning! Imagine if you had to do all these jobs yourself!” Then in the second activity: “Look how many people depend upon the farmer for their work!” Again, in activity three: “Here are all the people the farmer depends on!” and we go on to say, “...No one is self-sufficient, are they? For the satisfaction of our basic needs, we are all dependent on each other.” Through these exercises, including the final one on taxes, “the children will hopefully develop an appreciation for anonymous people, and will become better citizens themselves, knowing their own duties.” (2)

The economic geography lessons, also, can help the children understand the interdependencies of the global community. We want to show them that the world community is interdependent. “In order to accept, you must also give. Even if you have all the natural resources in the world, you cannot exist in isolation from other countries.” This will help the children realize that we are all part of the same whole. This awareness brings with it a sense of humility, which we must model ourselves. 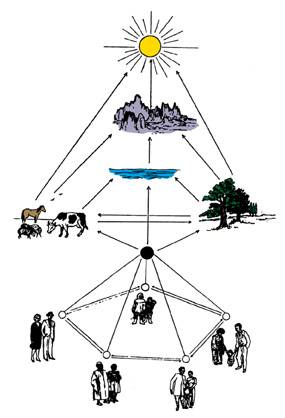 "Chart of Interdependency" from "Human Tendencies and Montessori and Education" by M. M. Montessori

This idea that we give as well as take comes up again in biology with plants and animals, which take from the earth but also give back to it. The child learns that there is a delicate balance between the earth and nature and so hopefully will learn to act responsibly with regard to maintaining this balance. Human beings have the power to change the world, so we must help the children realize how much we depend on our environment. In this way, they will appreciate it and thus take care of it. The children must realize the need to be respectful, thoughtful, and responsible in their choices. The children's study of ecology also shows the interdependence of organisms within the environment in which they live. With the Chart of Interdependency, we look at our dependence on the Supra Nature: “Once a discovery is made, it becomes the common property of all humanity.”

These lessons cultivate respect in the child for life in all its forms. They come to see how they are a part of the natural order of the universe and depend on others for their survival. They recognize the contributions and dignity of all the human population and the natural world.

Through learning about all the events and people that are a part of their own lived experience, the children not only develop a deep gratitude for life, but also an awareness of the importance of every life form. When this happens, they naturally realize their own strength and potential in the world. Dr. Montessori referred to this as a “Cosmic Task.” By observing the people and elements of nature around them that contribute to their own lives, they see that they have a powerful role to play in this universe. We must help the children think of their work as a cosmic task, contributing to the good of the whole.

In a lecture Mario Montessori gave in 1958, he shared:

The years we have spent in this work have shown us the enormous change that comes in children, the enormous respect that they develop for creation and every part of it. When they see that stones or colors or animals are simply aspects of the spiritual expression called creation and the path that life takes is an expression of spirituality because each item of creation is preparing, though unconsciously, a better situation for other creatures... This is what we want them to grasp. (3)

Montessori’s curriculum shows children that we are all interconnected. She believed that once children understood this concept—that every part of creation can prepare a better life for others—they, too, would want to fulfill their cosmic task, and make the world better for others.

Today’s world has no lack of challenges for future generations to address. But we do not need to despair that these problems lack solutions. Montessori’s vision for education gives us hope. It includes all the ideas and beliefs we need in order to solve today’s challenges. As we watch our Secondary Level graduates venture into the world, we are filled with optimism. These incredible young people have all the tools at their disposal to enact positive change and maintain constructive connections with human beings across the world. They were educated in an environment that gave them a deep sense of gratitude and respect for life in all its forms. With a Montessori education, our graduates understand that their specific work is a contribution to the world, and their cosmic tasks are as unique as they are. It is by witnessing this tapestry of strengths, passion, and genuine love for the world and others that we can maintain our confidence that the next generation will be worthy of both inheriting our world and stewarding it for an unknown future.