This is the first of three blog posts on the Montessori approach to reading and writing. Look for the second blog post in the coming weeks! 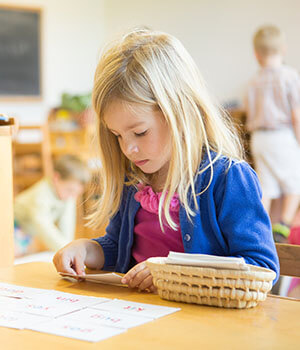 Few moments are as exciting as hearing your child utter her first word or hearing your son sound out a street sign from the back of your car. What a thrill it is to welcome our children into the magical world of spoken and written words!

Language is crucial to understanding the world and even one’s own thoughts. It’s such an intimate part of us that we describe the world we see with words in our heads, and we “see” the world we describe. We use language as our spoken and written means of communicating our feelings and thoughts and we use it to understand those of others. It is how we think, speak, read, and write.

It is truly remarkable how rapidly and well young children acquire language. When a child is born, he has none, and by age three he speaks in full sentences and understands us when we speak to him. Dr. Montessori recognized that young children are endowed by nature with unique, powerful abilities that enable this process:

“To develop a language from nothing needs a different type of mentality. [W]e acquire knowledge by using our minds; but the child absorbs knowledge directly into his psychic life. Simply by continuing to live, the child learns his native tongue.... We, by contrast, are recipients. Impressions pour into us and we store them in our minds; but we ourselves remain apart from them… Instead, the child undergoes a transformation. Impressions do not merely enter his mind; they form it. They incarnate themselves into him. The child creates his own ‘mental muscles,’ using for this what he finds in the world about him. We have named this kind of mentality, the Absorbent Mind.” (The Absorbent Mind, p. 35-36)

Examining Sounds as Indirect Preparation for Reading and Writing

Dr. Montessori pointed out that, “It is important to remember that the child’s actions are not due to random choice, but directed by his inner needs for development.” (Paula Polk Lillard, Montessori A Modern Approach, p. 35). Thus, when our infants are touching everything with their hands and exploring with their mouths, this has a direct purpose in preparing themselves for communicating with us, which means eventually, speaking and writing.

“Montessori concluded…that the tongue, which man uses for speaking, and the hands, which he employs for work, are more intimately connected with his intelligence than any other parts of the body. She referred to them as the ‘instruments’ of man’s intelligence.” (Lillard, Modern Approach, p. 34) It’s incredibly important it is that we consider this! We parents and educators want to be certain that infants’ tongues and hands are free, so that they can use these vital tools. Pacifiers get in the way of mouth formation and the encouragement to practice shapes and efforts which are precursors for speaking, so we want to avoid putting them in our infants’ mouths after those first weeks when they may be useful to soothe a newborn.

During the sensitive period for acquiring language, which begins in the womb and lasts through age five, “[The child] must have objects to explore in order to develop his neurological structures for perceiving and thinking just as he must be exposed to the world of human sound in order to develop his neurological structures of his language…It is of the utmost importance that the adult be guided by tolerance and wisdom when placing any necessary limits on the child’s need to touch and taste during this period.” (Lillard, A Modern Approach, p. 35)

So, it is important that the infant be free to make sounds and explore in order to discover that relationship between making sounds and hearing them come out of his mouth. He also will respond to others who communicate with him by looking into his eyes, speaking to him, and listening to him. This is the “dance of communication” that is so pleasurable for both adults and infants and causes us to bond emotionally. 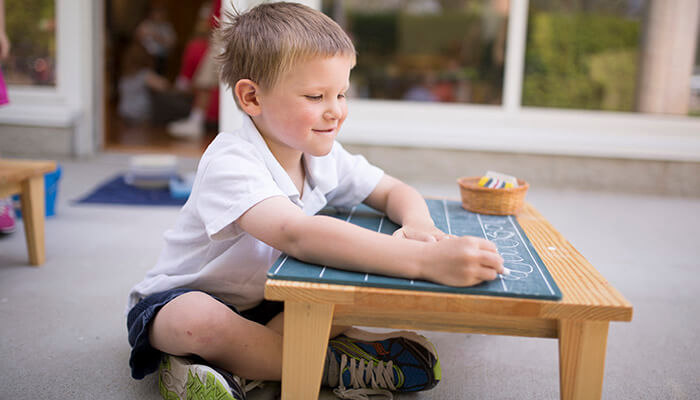 Infants respond very strongly to the invitation to communicate with us and so must be hard-wired to focus on human voices and speaking. Dr. Montessori described it this way:

“[How is it that] amongst the thousands of sounds and noises that surround him, [the child] hears, and reproduces, only those of the human voice?…It must be that the sounds of human speech make on him a deeper impression than any other sounds. These sounds must…cause such an intensity of emotion – so deep an enthusiasm as to set in motion invisible fibers of his body, fibers that start vibrating in the effort to reproduce these sounds.” (The Absorbent Mind, p.34)

Montessori’s concept and practice of indirect preparation is unique and highly effective. Alexander Phillips – the Principal at Suder Public Montessori School in Chicago – recently told me, “Here’s what I love about Montessori education: Regular educational systems take a child right up to a certain point in teaching something new and then – 60 or 70% of the time – leave the last leap in understanding up to the child. The fact is, some children will make that leap but some children just never will, and they are left behind to suffer and underperform. But Montessori takes every child – concretely – all the way to their own ‘aha’ moment, every time.” 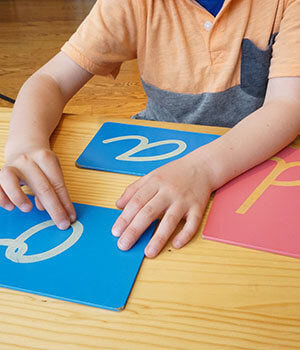 This happens is in large part because Montessori teachers are trained to use indirect preparation and have the materials and means to do so. The Sound Game, for example, prepares the young child to hear the sounds of our language, which they will then learn in isolation in the Sandpaper Letters. Through their practice with the sandpaper Touch Boards, the Baric Tablets and other physical materials, children prepare their hands to touch lightly, and to make smooth, exact and continuous movements, preparing them for physically tracing the Sandpaper Letters. Then, the sounds and the shapes of the letters are integrated when the teacher presents the Sandpaper Letters to the child, and he is able to make the sound, trace the letter shape, see the letter and hear his own voice all simultaneously. So, it isn’t just the Sandpaper Letters that help the child learn their letter shapes with the phonetic sounds, it is all the indirect preparation and the integration of the senses in motion that make this possible for the child.

Even the Practical Life Exercises such as washing a table and pouring water give a young child practice and preparation for sitting with concentration, controlling her movements with her mind and her muscles and for looking for logic in sequences. Numerous exercises in the Young Children’s Community and the Primary classrooms prepare the child to concentrate on one thing at a time, to focus her energies and movements, and to engage in communicating with the teacher. Everything the child experiences, in a way, indirectly or directly leads up to this experience with the Sandpaper Letters.

Montessori Approach to Reading and Writing: The Sound Game

A very important part of the preparing our children for speaking, reading and writing comes through the Sound Game. The teacher prepares a tiny basket with four or five miniatures of realistic objects inside. There may be a tiny tree, a china cup, a broom, and a porcelain rabbit, each only a half an inch long or smaller. The teacher holds one object out to the child and says what it is several times, very slowly and clearly, letting the child hold and examine the object and say the word as they choose: “We call this a tree…tree…tree…tree.” Then, the teacher will emphasize the first sound, “Tree begins with the sound…t, t, t, tree…t-tree.” The child may imitate, and then they move on to another object in the basket. They repeat this and talk about the objects as long as the child is interested. They are typically intensely interested in this practicing. They love to watch the teacher’s lips as she says the sounds, imitate her, and delight in someday identifying a sound before the teacher points it out. They may discuss the same objects for about a week, and then the teacher replaces the objects with new ones that have other sounds.

When a child gets very good at noticing the first sound of a word and can articulate those sounds well, the teacher may begin to point out the sound that words end in: “This is a potato. Potato ends in the sound, o. Potato. Potato. O.” She may draw out the sound to be identified to help the child to hear it. Eventually, they will search for middle sounds, such as the sound “oo” in “shoe.” There are many steps to the Sound Game and it can be played all throughout the sensitive period for language development, increasing the challenges for the ear in hearing as well as the mouth in speaking. The objects themselves are delightful for the children to look at and to hold, and they give visual clues to help them. The result of playing the Sound Game often and for a year or more is not only a heightened awareness of sounds and an ability to produce them clearly but also an increased interest in the individual sounds in our language and an enthusiasm for them.

Along with the analysis of the sounds within words, children are hearing how we put words together to make phrases. Montessori pointed out that in the first years of life, “The child has not only absorbed words and meanings; he has actually absorbed sentences and their constructions.” When we say, “The tumbler is on the table,” the child does not say, “On tumbler is the table the.”