Between the ages of three and six, children readily absorb all aspects of their environment in a quest to become part of their culture. The Children’s House, also referred to as the Montessori Primary Level, provides an educational setting rich in factual and beautiful materials, where the children construct their own intelligence with meaningful and purposeful work.

At Forest Bluff School, the Montessori Primary Level introduces children to a larger classroom community where they learn the fundamental academic concepts that are the foundation for their later learning. The teachers present new ideas and hands-on materials as each child is ready and shows interest. 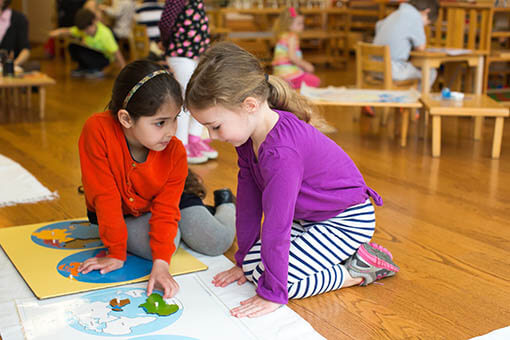 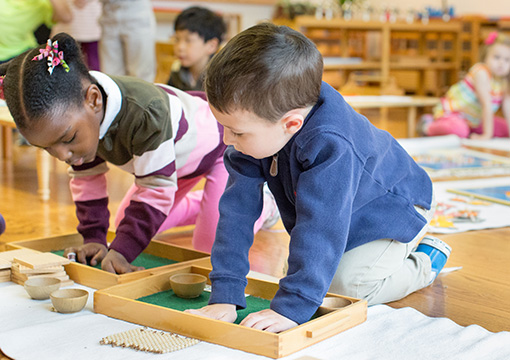 Children choose their own work with the guidance of the teacher when necessary, and work independently or in small groups. This freedom to make choices is important to the development of responsibility and self-mastery for which Montessori students are known.

By the end of our Montessori Primary Level, most children at Forest Bluff School are writing in cursive with ease and are able to read simple stories of their own creation that they enjoy illustrating with a drawing or water color painting. They understand mathematical operations of addition, subtraction, multiplication, and division and know many math facts, as well as the names of continents and their countries, animals and plants. Younger children stay from 8:30 to 11:30, while five and six-year-olds remain for lunch and are dismissed at 3:20.

For children under age six, we recommend books that reflect reality and are written either poetically or with proper sentence structure. By reading to your children every day and often, you are instrumental in their thinking, speaking and future reading development. By modeling careful handling of books and promptly removing any damaged ones, you will help children develop respect for their precious collection.

Forest Bluff instilled in me an invaluable love of language that I have never lost. There is an unparalleled freedom that comes with being able to write down ones very own thoughts, thus making abstract thoughts concrete. Writing is a form of creation, which I was not only taught to perform but encouraged to participate in.

Even as early as four years old, I began expressing myself with the help of the Moveable Alphabet. The possibilities I could create with those blue and pink letters were endless! And the best part of the entire process was that I was not confined or restricted by rules of spelling. For instance, there's a picture of me somewhere having spelled my name as "Gretu" with the Moveable Alphabet letters.

Of course I learned the proper spellings of words later, but the value of unrestricted writing at that early age was that writing became synonymous with expression, and not with regulation. I was celebrated for what I was able to communicate, not reprimanded for the technical errors I made in the process. As a result, writing for me became a joy, and I have carried that sentiment with me to this day.